I’m a short and sweet kinda girl, Keep it Simple Silly (KISS). Therefore, I will get right to the point. My family traveled to Madrid and Dublin for Christmas to visit our oldest daughter.  Trying to feed three celiacs is easier than feeding one.  At least we were an equal number of family members GF to non-GF. While there, we had no trouble finding gluten free food. Actually, it was much easier than at home. I can’t say enough how pleased and impressed we all were in our dining experiences in both cities! I have tried to document our food adventure for you, in case you find yourself in either city, or both.  We ate well, almost too well.

MADRID As I understand it, not a lot of celiacs live in Madrid, but they like to visit.  We ate at several restaurants and shopped at a local grocery store, all with ease and delight. Our first stop was a chain restaurant, Vips.  We were all so tired after traveling all day that I didn’t even think to take pictures.   Actually, it was at the end of the evening that I thought about sharing this food adventure with you. We had burgers and fries.  It was a treat to eat a burger on a GF bun and fries from a dedicated fryer.  Though the items were not as tasty as the pictures led us to believe, the fact that it was all GF made it all worthwhile.  In their defense, the food may have been tasty; we were extremely tired from traveling all day. It was at this restaurant that we discovered that blue was the dedicated color for Gluten Free Cuisine. We had different placemats and dinnerware that were blue; as compared to the standard white of the non-GF foods.​ After dinner, my husband and son went the local grocery store in Lavapies, Carrefour, on our daughter’s suggestion. WOW!!! What a selection:  They bought a few items for the first morning, and then we all went back to stock up on breakfast foods for the next few days.   We were limited on what we could buy, as we didn’t have much of a refrigerator or eating utensils.  We were very resourceful. ☺ 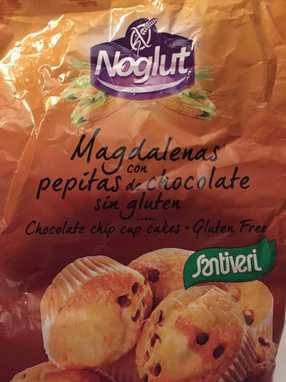 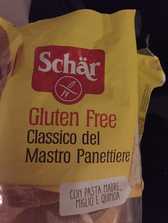 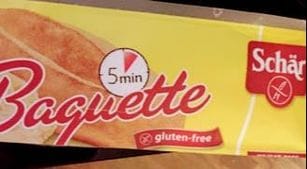 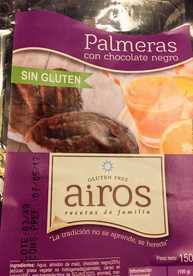 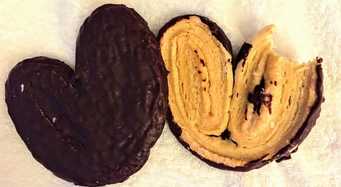 Our dining adventures took us to several restaurants: A tapas bar, Taberna La Concha, the service was friendly and the food was delicious.  Even though only two members of our party ordered wine, the server brought enough aperitivos (appetizers) for us all to enjoy. He even made sure they were gluten free. 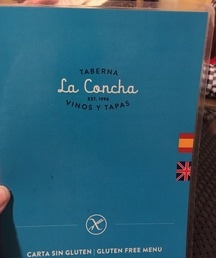 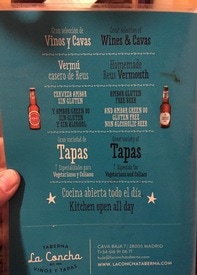 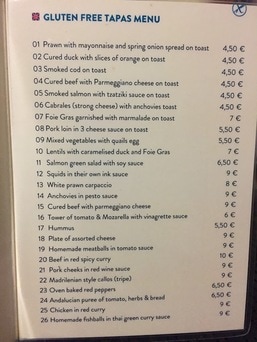 {"items":["493610_fa68e283256a4a87af0705ec84bc0438~mv2.jpg","493610_7d584527f5ad45eca0e843063a937da9~mv2.jpg","493610_904e988446d3496b9dc02f1f00e5db9a~mv2.jpg"],"styles":{"galleryType":"Columns","groupSize":1,"showArrows":false,"cubeImages":true,"cubeType":"fill","cubeRatio":1,"isVertical":true,"gallerySize":300,"collageAmount":0,"collageDensity":0,"groupTypes":"1","oneRow":false,"imageMargin":10,"galleryMargin":0,"floatingImages":0,"chooseBestGroup":true,"smartCrop":false,"hasThumbnails":false,"enableScroll":true,"isGrid":true,"isSlider":false,"isColumns":false,"isSlideshow":false,"cropOnlyFill":false,"fixedColumns":3,"enableInfiniteScroll":true,"isRTL":false,"minItemSize":50,"rotatingGroupTypes":"","rotatingCubeRatio":"","gallerySliderImageRatio":1.7777777777777777,"numberOfImagesPerRow":3,"numberOfImagesPerCol":1,"groupsPerStrip":0,"borderRadius":0,"boxShadow":0,"gridStyle":1,"mobilePanorama":false,"placeGroupsLtr":false,"viewMode":"preview","thumbnailSpacings":0,"galleryThumbnailsAlignment":"bottom","isMasonry":false,"isAutoSlideshow":false,"slideshowLoop":false,"autoSlideshowInterval":4,"useCustomButton":false,"bottomInfoHeight":0,"titlePlacement":"SHOW_ON_HOVER","galleryHorizontalAlign":"center","galleryTextAlign":"center","galleryVerticalAlign":"center","scrollSnap":false,"itemClick":"link","fullscreen":false,"allowSocial":false,"allowDownload":false,"allowTitle":true,"allowDescription":false,"loveButton":false,"loveCounter":false,"videoPlay":"onClick","scrollAnimation":"NO_EFFECT","scrollDirection":0,"overlayAnimation":"NO_EFFECT","arrowsPosition":0,"arrowsSize":23,"watermarkOpacity":40,"watermarkSize":40,"useWatermark":true,"watermarkDock":{"top":"auto","left":"auto","right":0,"bottom":0,"transform":"translate3d(0,0,0)"},"loadMoreAmount":"all","defaultShowInfoExpand":1,"allowTitleExpand":true,"allowDescriptionExpand":true,"allowLinkExpand":true,"expandInfoPosition":0,"allowFullscreenExpand":true,"fullscreenLoop":false,"galleryAlignExpand":"left","addToCartBorderWidth":1,"addToCartButtonText":"","slideshowInfoSize":200,"playButtonForAutoSlideShow":false,"allowSlideshowCounter":false,"hoveringBehaviour":"APPEARS","thumbnailSize":120,"magicLayoutSeed":1,"imageHoverAnimation":"NO_EFFECT","calculateTextBoxHeightMode":"AUTOMATIC","calculateTextBoxWidthMode":"PERCENT","textBoxHeight":0,"textBoxWidth":200,"textBoxWidthPercent":50,"textImageSpace":10,"textBoxBorderRadius":0,"textBoxBorderWidth":0,"textsVerticalPadding":0,"textsHorizontalPadding":0,"titleDescriptionSpace":6,"customButtonText":"","customButtonBorderWidth":1,"customButtonBorderRadius":0,"loadMoreButtonText":"","loadMoreButtonBorderWidth":1,"loadMoreButtonBorderRadius":0,"imageInfoType":"NO_BACKGROUND","itemBorderWidth":0,"itemBorderRadius":0,"itemEnableShadow":false,"itemShadowBlur":20,"itemShadowDirection":135,"itemShadowSize":10,"imageLoadingMode":"BLUR","expandAnimation":"NO_EFFECT","imageQuality":90,"usmToggle":false,"usm_a":0,"usm_r":0,"usm_t":0,"videoSound":false,"videoSpeed":"1","videoLoop":true,"galleryLayout":2,"gallerySizeType":"px","gallerySizePx":300,"allowHover":true,"mobileSwipeAnimation":"NO_EFFECT","gotStyleParams":true,"showVideoPlayButton":true,"modifiedGallerySize":true,"selectedLayout":"2|bottom|1|fill|true|0|true","layoutsVersion":2,"selectedLayoutV2":2,"isSlideshowFont":false,"externalInfoHeight":0,"externalInfoWidth":0},"container":{"galleryWidth":2580,"galleryHeight":1440,"scrollBase":0,"height":null,"width":null}}
Goat cheese on a rice cracker
From the menu #4 Cured Beef with Parmeggiano cheese on toas
From the menu #5 Smoked Salmon w/ Tzatziki sauce on toast
From the menu #02 Cured Duck w/ slices of orange on toast

After lunch and some sightseeing, we stopped at the only GF churro shop in Madrid, Maestro Churrero. Though these weren’t the best, they were better than no churros, or eating a gluten one, which is not an option.  ☹  The churros can be served with a hot cup of melted chocolate. It tasted like melted semi-sweet and bittersweet chocolate mixed together. Not a bad combination. 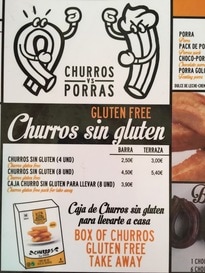 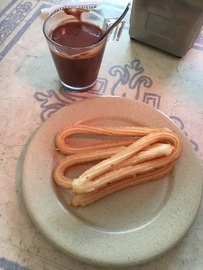 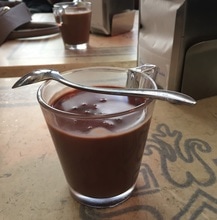 For Dinner we had Mexican food (don’t judge), at La Rosa Negro. The server was very attentive to our dietary needs. 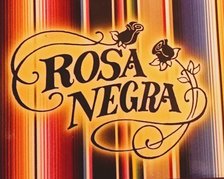 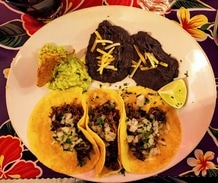 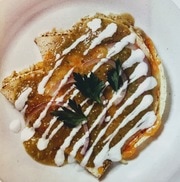 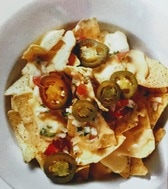 Other treats of Madrid: A GF bakery cleverly named, Celicioso.  These baked goods are very pretty on the eyes.  My children will honestly tell you that my treats taste better than these do. I’m too modest to say so myself.  However, the bakery is adorable; the staff was nice enough (when we spoke Spanish.) We did order a little too much here, but how else will you know what the items taste like? ​

I love the name of this business
A little window shopping from the street
A sampling of the inside display case
another sample - mmmm
We ordered a raspberry cheesecake, chocolate cupcake, carrot cake and bananbread

Christmas Eve found us at a loss of restaurant choices, as most places were closed. Here is where being resourceful comes in handy.  We bought sandwich fixin’s and paper plates and enjoyed our Grocery Store Christmas Eve dinner. Actually, it was very nice to relax lounging around the hotel room eating makeshift sandwiches and binge watching TV. We found Judge Judy to be quite entertaining. “Do I look like I need your help?” is our new catch phrase.  We had done a lot of walking seeing all the sights Madrid has to offer, resting our feet felt so good!  Don’t feel too sorry for us, our daughter secured a Christmas dinner reservation at a delicious Italian restaurant, Gino’s.  Turns out they are owned by the same company that owns Vips, though you would never know it by the menu choices!

This looked much better in person, It tasted fan-tab-u-lous! Pasta Carbonara!
I didn't get to try this as my son managed to finish it before I had a chance. It's a good thing too, since I'm allergic to tomatoes! Pasta Bolognesa
I did get a taste of this crust with a little bit of the melted cheese. This was also delicious! Pizza, how can you go wrong?!?
GF chocolate cake in a restaurant! You betcha! This was similar to some flourless lava cakes I've had in Phoenix, but this one was light and airy!
GF Tiramisu. This was soooo gooood!

We also enjoyed a local chain coffee shop/eatery,Rodillo.  According to my family they have great coffee and espresso, but to our delight they also had GF sandwiches. All of the sandwiches on the menu were simple, fast and hit the spot.

DUBLIN Like Madrid, dining was easy and a pleasure!  Our first meal was at a local chain, KC Peaches.  The first location we went to was wonderful. The staff was helpful and the food was delicious.  The second one was in a busier part if town, and offered seatign upstairs, which lent to some fun views of the street. 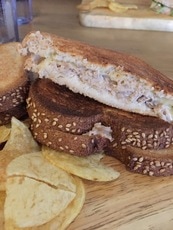 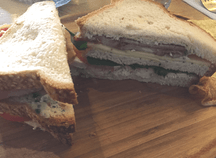 Again, we went to the local grocer to buy breakfast foods. 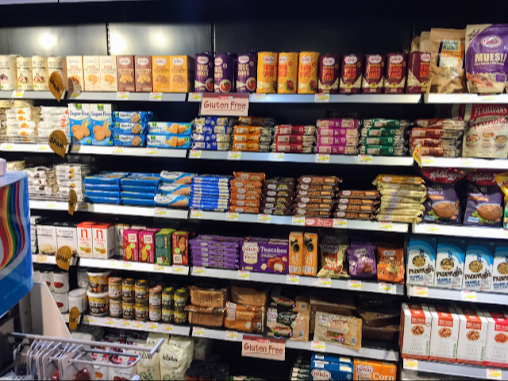 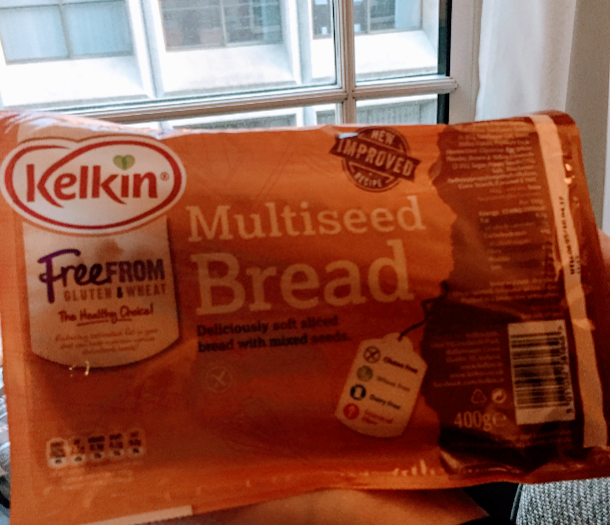 Other than our delicious Italian Christmas dinner in Madrid, the crème de la  crème was Fish and Chips in Dublin!  It was so good we had it twice! On purpose! The manager, Salvatore, is originally from Italy and has lived all over the world. He was able to give our oldest daughter some travel tips on her upcoming trip to Italy. She is very much enjoying living in Spain and able to see Europe as budget friendly as possible.  Anyway, Fish and Chips!

Beshoff Bros has a dedicated fryer and food storage for its gluten free foods!  I know! That’s rare! We enjoyed cod and smoked halibut fish and chips as well as onion rings!

A must visit. If I could I would go once a week!
THIS WAS DE-LISH-OUS!!! Lightly fried cod on a bed thick chips!
Seafood chowder, served with chips
Another treat, GF onion rings! Yes, they were HUGE!

Other treat along the way. We stopped a few doors down from the hotel to a nice coffee shop, Cafe Nero's. They had GF treats too!  I finally got to enjoy a European cup of hot chocolate, it is not at sweet as ours, but delicious all the same. I enjoyed the regular hot chocolate and the Milano, which is sweeter than the regular.  Both look almost too pretty to drink, almost!

We tried to stay away from Starbucks on our trip, but coffee was needed and they were nearby and open.  I'm glad we did. They had GF muffins! We didn't try one, not hungry, rare, I know!  It's the packaged one on the left.

Air Travel We flew on American Airlines from Phoenix to Madrid through Dallas.  My husband ordered GF meals for us on the plane from Dallas to Madrid.  The flight attendants had no record of our order and scolded us ”Never trust ordering on the website! Always order on the phone!” That info didn’t help us much at this point.  Luckily a passenger sitting behind us heard this and chimed in, “I ordered my vegan meals online and I have a vegan meal. I don’t see the problem.!”  The flight attendants tried to assist us by offering all the dinner selections for us to read the ingredient labels. None were suitable.  The flight attendant found three meals from First Class that were suitable, steak, quinoa and asparagus. As much of a treat that was, that was pretty much the only food on the plane we could eat.  Breakfast was a danish and yogurt. Luckily, my three non-celiacs shared. We got their yogurts and they got our danishes.   It’s a good thing I packed snacks, but those wear thin on the taste buds meal after meal.

VIRGIN ATLANTIC!! We flew from Dublin to Los Angeles (LAX) via Heathrow. If you can, fly Virgin Atlantic! They had our order right, even from their website! We ate like royalty. Not only did they have GF meals, they had GF bread to go with them, soft tasty bread too! Some of the snacks (pretzels) were gluten, but that’s okay. The food and service was amazing. I don’t think the attendants rested on the nine hour flight, as they were always coming through with some sort of drink or snack.  I didn't have my camera handy to take picture of the on-glight food, but it was tasty! Not only was the food a great treat, the flight attendants were very friendly and talkative on the flight. Overall I very much recommend this airline for international travel.

The Dublin airport even had GF snacks to purchase: 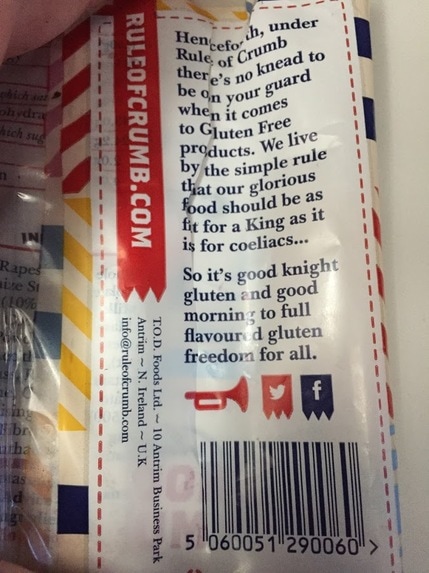 LAX ☹  We had a 4 hour layover in the LAX airport waiting to come home to Phoenix.  I assumed ( you know what that means) that LA would have some GF dining options in their airport. After several inquiries and laps around the terminal, we found a restaurant that stated that they had GF menu items.  Victory at last!  We were seated and waited to give our order. The server informed us that they no longer made GF pizza. We could order a hamburger protein style that came with french fries that were cross contaminated with no GF options for substitutions.  We were a tad pissed.  There was no way I was going to spend $15.00 on a hamburger patty and some cheese times three!  We were about to convince ourselves that we could wait seven hours to eat dinner. (Four-hour layover plus a two-hour flight, then travel home time!) Luckily, my husband spoke to the manager, I didn’t see a reason to, she can’t make GF food magically appear.   Well, she did!  Apparently, the server was incorrect. All of the pizzas were in fact made on a GF crust!  It was not the best, but it was a GF dinner.

All in all it was a great trip! Seeing my daughter rock Madrid and GF food too! It was a Christmas to remember!

Gluten Free Friendly* Restaurants Where do the Lemmes go to dinner??  Having half of our family enjoying life as celiac can sometime have its challenges, but luckily going out to dinner is getting e

Where to start my shopping adventure?

Luckily, there is a plethora of gluten free products on the market. When I was first diagnosed over ten years ago, I had to mail order several items. With the taste and texture of gluten free items be